“When we all think alike, no one thinks very much.”

In the previous blog posts of this series we have discussed mainly about organisational factors and decisions around learning from failure, but let’s face the facts. Failure is not nice. It feels devastating. As a word it almost has a stigma in it. But it shouldn’t be that way. Up here north in Finland, we have had National Failure day for years now. The point of the day is simple: to make failure more understandable, more acceptable and less worrisome. In this post we’ll be discussing how to orient yourself and your organisation more towards accepting and learning from failures instead of covering and reframing them.

Fixed mindset is a concept coined by Dr. Carol S. Dweck and popularised in her excellent book Mindset. In her theory there are two types of mindsets: Fixed and Growth. Those with a fixed mindset believe that talent is innate and there’s not much one can do to change their abilities. They are concerned how they are judged if they were to do something which often leads to not trying in the first place. On the contrary, those with a growth mindset believe that with deliberate practice and effort anything can be improved. Most observant readers may already have guessed it’s not just individuals but also organisations that live and breathe with one of these mindsets. Note however, that you or your organisation may have a growth mindset in some areas but fixed mindset in other areas. 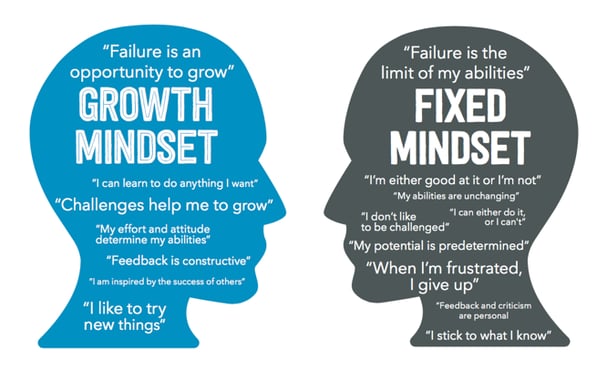 People with different mindset use different language. Those with a fixed mindset often talk about talent and character and whenever they fail, they label themselves with phrases such as “I am a failure” or “I’m not the type of person that…”. Those with a growth mindset concentrate more on behaviour and go on with explaining mistakes by saying “I failed”, “I couldn’t do it this time but I’ll try again”. What’s more people with growth mindset often don’t even see that they are failing. What they see are opportunities to learn, and they rigorously analyse what to do differently next time.

Next time when you are giving constructive feedback, instead of labelling their character traits and telling what kind of person they are or are not, let them know what you liked or didn’t like in their effort. Research shows that both positive and negative labelling lead to people suppressing their effort. People can and will change when you let them.

Both fixed and growth mindsets are essentially about beliefs we hold about ourselves and about the world. So what happens when we experience evidence that clearly contradicts with our beliefs? In psychology this moment and mental discomfort is called cognitive dissonance. The stronger the belief is, the more likelihood that we don’t accept the contradictory evidence per se, but instead reframed it support our belief.

This happens all the time. Think about the last time you or someone close to you became absorbed in a new hobby, diet or topic and started to push it to everyone. The more they told and touted the topic, the more they got invested in the belief that it has to work. It becomes part of their identity. Some of the strongest beliefs people often are about their jobs. Attacking against or blaming for ideas or actions is sometimes a declaration of war against identity. That’s why blaming and sneering can be so devastating. They go under the skin and people are ready to almost anything to protect their identities and self-esteem.

When you hear phrases like “it was just an honest mistake”, “It was a one-off incident, and we should treat it like an outlier” or “it was just an isolated example that wasn’t anyone’s fault”, it often dictates that someone is protecting their self-esteem to cover mistakes (that might not even be their fault in the first place). The Best thing you can do is to over-communicate that no-one gets punished as long as all errors get investigated and learned from.

Fear of failure is a sort of pre-cognitive dissonance combined with fixed mindset. People can’t tolerate the thought of failing and experiencing what others may say or feel about them. In other words, people hope for success, but are too scared to take positive action. Perfectionists are extreme examples of fear of failures. They spend huge amounts of time coming up with perfect solutions, designs or plans that they don’t even get a chance to fail at all, at least until it is too late. They become so worried about failing that they never even get to try in the first place.

For organisation fear of failure is especially problematic since the turbulent business environment of today requires more innovating, more experimentation and more testing than ever. No organisation can come up with a perfect plan that just magically turns into reality. If your organisation doesn’t have a good way to define if a project or experiment is a success or not, no learning will ever happen.

Groupthink was first introduced by psychologist Irving Janis, and it happens when a group of people start to prioritise group harmony over the goals and results it was put together to achieve. Everyone agrees. No one is willing to take a critical stance. It may even feel like having a unified opinion is a success in itself. But don’t take this lightly: it has and it will lead to catastrophic decisions. Just like Einstein has been quoted saying: “When we all think alike, no one thinks very much."

Contrary to the common belief that we should treat ideas on a silver platter, we have come to believe that it’s better to evolution do its part in this arena as well. When investigating incidents or brainstorming for ideas, don’t accept the ideas as they are. Let disagreement make them better. Let criticism get the worst parts out and more diverse ideas bring the best parts in light. Communicate the importance of being on the same table about goals and expected results, not about being in agreement about everything. Highlight goal harmony over team harmony.

Come up with ways and practices encouraging more and alternative viewpoints and constructive disagreement. Being an independent thinker and team player are not opposites. On the contrary, people can be both at the same time. Just help them fill both roles. Open a channel for reporting all kinds of failures, not just IT and safety incidents, or maintenance requests. Bad news, by nature, need to move fast!

Other mental barriers worth mentioning

If you haven’t learned anything else in this blog series, just remember this: Failures are necessary and inevitable part of growth, evolution and success. If you or your organisation are not failing enough, you are probably not adapting to the VUCA enough. Now is the time to start recording failures, stop blaming them and spur on investigating them to come up with better practices and improved systems.

Continue to the other blog posts of the series here:

Why Is Safety Culture Built By Increasing Diversity?